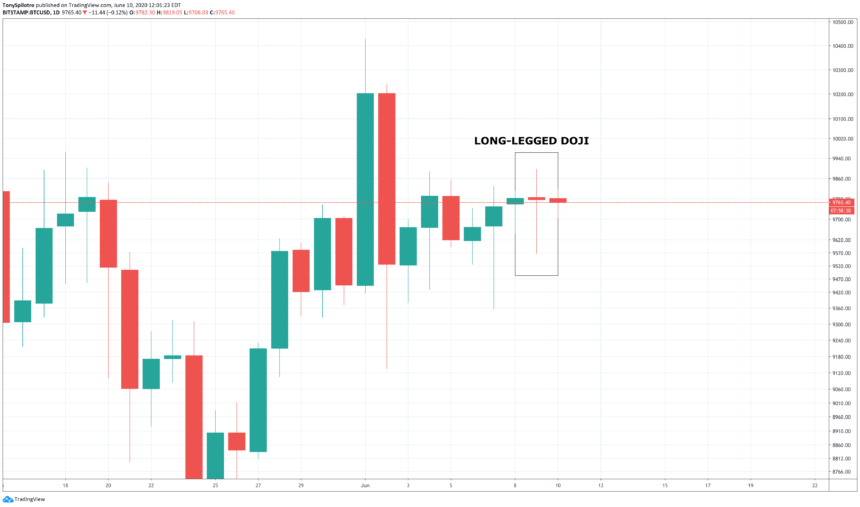 Last night, Bitcoin price closed the daily trading session with a long-legged doji. This type of Japanese candlestick often signals indecision and a lack of determination from bulls.

In the past, each time this signal appeared, a deep correction followed. With bulls potentially losing control once again, bears could take over and push Bitcoin price back down to test support below.

Bitcoin Price Daily Closes With Long-Legged Doji: What Does This Mean?

After closing the April 2020 monthly candle above $8,500, the leading cryptocurrency by market cap has been trading above that key level for six weeks and counting.

From the Black Thursday bottom up to current levels, bulls were able to rally over 150% in under three months, with no more than a 20% correction along the way up.

But now that bulls have pushed the price per BTC back up to the asset’s most important and strongest resistance yet, buyers are beginning to lose control, according to the latest daily candle close. According to the study of Japanese candlesticks, depending on the way an asset’s trading session closes, along with the height of the candlestick body and its shadows – also called wicks – it can tip traders off as to what to expect in the following trading sessions.

In this case, Bitcoin price last night closed the daily with a long-legged doji, showing not only indecision in the market, but that bulls may lack the determination required to breach this powerful resistance that has held the crypto asset back for nearly two years now.

According to Investopedia, long-legged doji are most significant when they appear at the top of an uptrend. There, they signal that after a strong advance, buyers are running out of steam, and a reversal could play out soon. Looking back over the last year of top formation in BTCUSD price action, the leading cryptocurrency by market cap closed at least one long-legged doji during each top before plummeting to a new low.

One of these Japanese candlestick formations marked the top of the August 2019 rally. More appeared twice in September ahead of the post-Bakkt crash, along with another pair before and after the China pump. There was yet another before the historic Black Thursday market selloff.

Now, the cryptocurrency has painted a long-legged doji once again.

Is this time different, or is this long-legged doji a warning sign that bears are about to take back control over cryptocurrencies, and caused another massive crash in Bitcoin?