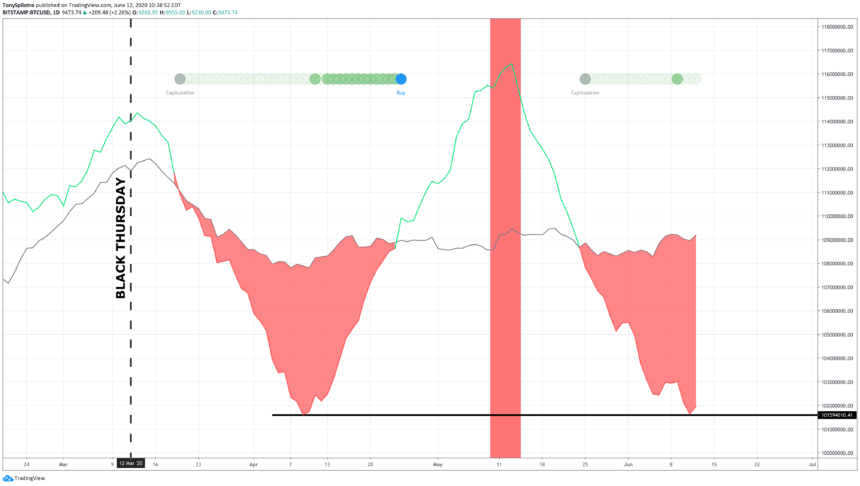 Bitcoin price continues to consolidate above $9,000 but has repeatedly failed to break above $10,000. The lower the asset’s value gets, the more it falls below the cost of production for many miners.

A key metric measuring the impact price action has on miner operations, is signaling that more miners are capitulating during the current price action than during Black Thursday. If prices continue to decline, what might this mean for miners powering the Bitcoin protocol?

Bitcoin price is trading at just under $9,500 currently, still up over 140% from the low set on the historic day now known as Black Thursday 2020.

Despite the asset trading at nearly 3 times the value from the bottom set back then, the current price action is causing a comparable amount of Bitcoin miners to capitulate.

According to a tool developed by Bitcoin researcher Charles Edwards dubbed the Hash Ribbons, miners are capitulating at a similar rate compared to when Bitcoin was trading at such lows. But what’s the reason for this?

All of miner’s profit margins depend on the current market price of Bitcoin and the current cost of energy and other operational expenditures.

The higher the price of Bitcoin and the lower the opex, the better the margins and the more profitable the business.

However, when the cost of producing each BTC falls below the always fluctuating market price of the cryptocurrency, miners either take the loss or more likely, shut down their machines until either difficulty adjusts or prices rise to more profitable levels.

During the Black Thursday market collapse, the price per BTC fell so low, it immediately began causing miners to capitulate in the days following.

Now, the Hash Ribbons, a tool used to gauge the impact of miners on Bitcoin price and the health of the network, is showing a similar capitulation event taking place across the mining industry. But why exactly this happening when Bitcoin price is trading at more than double the price it was then?

The answer is due to the halving. Come early May, the block reward miners receive was slashed in half from 12.5 BTC to 6.25 BTC. This also doubled the cost of producing each BTC overnight.

In the chart above, the Cost of Production indicator demonstrates just how significantly the metric is below the price of the first-ever cryptocurrency currently.

Looking at the differences, indicated by the dark red shaded area above BTCUSD price action, the asset’s price is currently trading at the largest discrepancy in the cost of production over the last two years.

Related Reading | Bitcoin Slides As Greater Financial Market Is a Sea of Red, How Far Will BTC Drop?

This suggests that the current capitulation in miners may be worse than the drop to the bear market bottom at $3,200, and the retest from Black Thursday that saw prices break under $4,000 abruptly.

If Bitcoin price drops further from here, the selloff due to miners closing up shop and selling off their remaining BTC holdings could send prices tumbling further.

It will be interesting to see how price action further develops in relation to the cost of production. When the Hash Ribbons do eventually signal that capitulation is over, it will likely give the final buy signal before the next bull market finally begins.