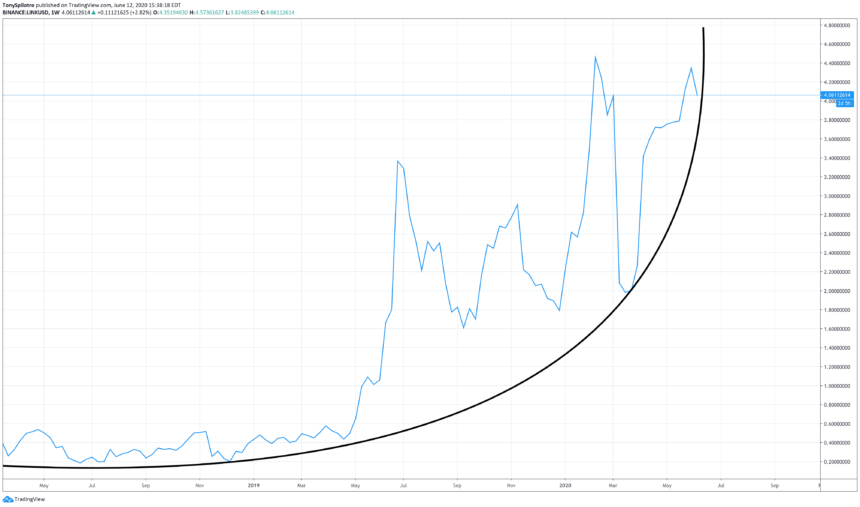 Chainlink, the seemingly unstoppable superstar performer of the cryptocurrency market for nearly the last two years running, may be finally out of steam.

According to the asset’s price parabola, the long-standing uptrend could be approaching its end. If and when the parabola does break, massive profit-taking could cut the altcoin’s valuation down to size.

From the very bottom of Chainlink’s 2018 bear market low, the altcoin had an incredible, over 2,300% climb to its all-time high price of just over $5 per LINK token on the LINKUSD pair.

Few cryptocurrencies have shown such strong performance since the cryptourrency bubble burst.

The cryptocurrency market standout closed 2019 as the industry’s top performer, beating Bitcoin, Binance Coin, and the few other winners of the overall bearish year.

The decentralized oracle focused altcoin was on fire and spreading rapidly. Chainlink became so popular due to its performance, it was voted the likeliest crypto asset to bring the best performance in 2020, just like the year before.

They were right. In March 2020, the asset set its all-time high price record just ahead of the Black Thursday madness that wiped out cryptourrency valuations.

Chainlink itself got caught up in the chaos, causing prices to flash crash to nearly zero on some exchanges. Bitcoin and other crypto assets also had historic meltdowns, all while stocks, precious metals, and other markets crashed in tandem.

The seemingly unstoppable altcoin rebounded nearly to the same level as before, but stopped short of another record, instead setting a lower high and kicking off what might be the start of brutal distribution and profit-taking after two years of solid performance.

What Goes Up Must Come Down: Cryptocurrency Superstar Could Soon Fall From Grace

Coinciding with the most recent top in LINKUSD and LINKBTC, each trading pair triggered a TD 9 sell signal, according to the highly reliable TD Sequential technical analysis indicator created by marketing timing guru Thomas Demark.

The tool has been highly accurate across many years of cryptocurrency market price action, calling many tops and bottoms before the trend changes occurred.

The most recent high set, was also a lower high on both short and higher timeframes. The Black Thursday selloff also set a lower low. A lower high combined with a lower low is the exact definition of a downtrend, which may be just beginning and could soon pick up in severity.

The earliest Chainlink investors bought into the asset at just 15 cents under two years ago. They are up in their investment still by over 2,000%, despite an almost dollar decline on the LINKUSD pair.

Any of these investors could begin to taking profit as the first sign of a selloff, starting or even completing a distribution phase. Distribution phases, according to Wyckoff theory, follow accumulations and mark up phases, and is followed by a markdown phase. This is when asset prices fall to new lows.

The final straw breaking the camel’s back, is the fact that the asset’s long-term parabola is about to breakdown. This parabolic uptrend first began nearly two years ago, at the start of 2018. As we’ve learned by Bitcoin’s parabolic advance, when the advance is broken, the asset typically crashes by as much as 80% or more, according to data and performance expectations from industry experts like Peter Brandt.

An 80% decline from its all-time high, would take the price per LINK token to just $1 each. At that level, the asset would likely be reaccumulated before the whole cycle potentially restarts once again.