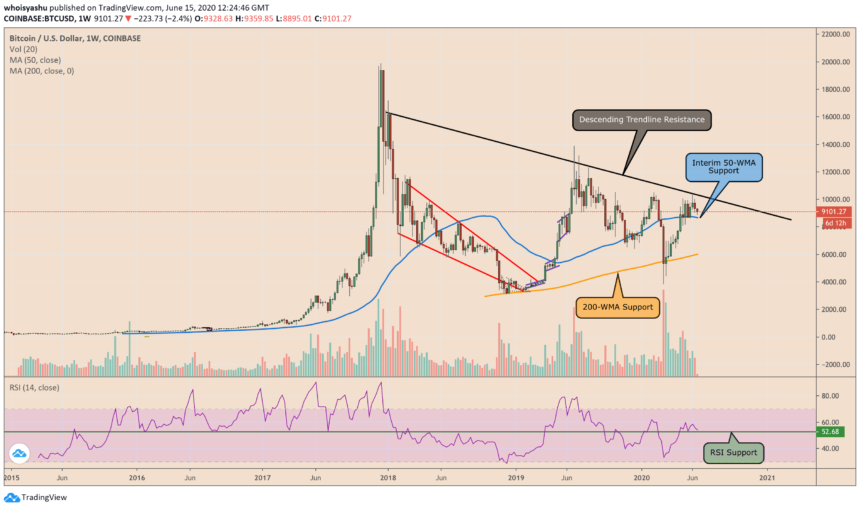 Bitcoin may fall to $6,000, according to an eerily accurate fractal.

So it seems, Bitcoin is extending its bearish correction after testing a long-term Descending Trendline resistance. The downside move so far has crashed the cryptocurrency by as low as 14.70 percent in the last three weeks.

At the same time, specific patterns are emerging near the head of the ongoing downtrend. For instance, a 50-weekly moving average (the blue wave) is holding Bitcoin from extending its bearish bias. But repeatedly testing it causes a breakdown, shows Bitcoin’s history. At press time, Bitcoin is trending in the middle of the Descending Trendline (resistance) and the 50-WMA (support). As the distance between the two technical parameters contracts, it would leave Bitcoin with no choice but to attempt a breakout.

Historically, Bitcoin’s breakout has been biased to the downside. The cryptocurrency repeatedly attempted to break the Descending Trendline but failed. In comparison, the 50-WMA stood weaker – and allowed bitcoin to test lower levels.

Meanwhile, Bitcoin’s weekly RSI confirms a breakdown. The horizontal green line in the chart above represents a makeshift support level. When the RSI moves below it, it typically leads to more substantial downside move in the price – and vice versa.

Bitcoin is testing the RSI support, all around the same time it eyes 50-WMA. Breaking below them in conjugation leaves the cryptocurrency in a stretched-out bearish territory, with the next price floor lingering near the 200-week moving average.

The orange wave in the chart has behaved as a bottom on two of Bitcoin’s long-term downtrends. In 2018, the cryptocurrency rebounded by close to 330 percent after testing 200-WMA. Also, in 2020, bouncing back from the said level led the price 95 percent higher.

If the fractal plays out as it intends to, then bitcoin risks crashing towards the 200-WMA. As of now, the orange wave is right near $6,000.

At the same time, if RSI holds above the green support line, then bitcoin could attempt another breakout above the Descending Trendline support.