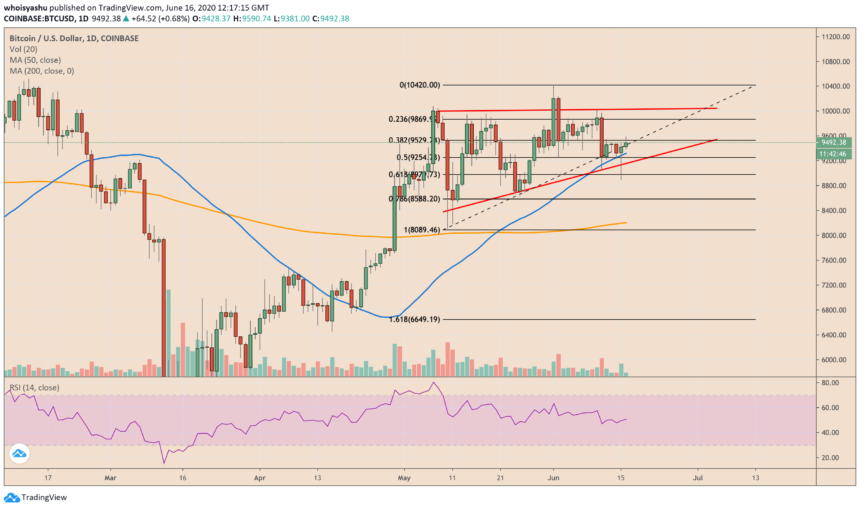 The benchmark cryptocurrency surged by 7.82 percent from its 24-hour low near $8,895. The move uphill took its price above $9,500, a psychological support level. At its intraday high, bitcoin was changing hands for $9,590. The local top prompted traders to take short-term profits, causing a minor price correction. Nevertheless, Bitcoin maintained a solid floor above $9,500 – despite slipping briefly below it. The move indicated that traders are waiting for the U.S. market to open and guide them for the next session’s bias.

Both at the beginning of this week fell in tandem over investors’ growing fears of the second wave of virus infections. Nevertheless, the Federal Reserve’s commitment to purchase individual corporate bonds via additional stimulus sparked a recovery rally in the stock market. Bitcoin followed suit.

Given the correlation would continue after the New York opening bell Tuesday, Bitcoin expects to rise to its next resistance level target near $9,800. The upside zone pops on the cryptocurrency’s Fibonacci retracement graph between its swing low of $8,089 to high of $10,420. It is because the U.S. stocks are hinting at an optimistic start. Futures tied to the S&P 500 rose 1.79 percent, while that of the Dow Jones rallied 2.31 percent.

The upside sentiment came ahead of fresh data that would show how consumers behaved in May after easing of lockdown in the several U.S. states. Fox News reported that investors are anticipating a record rise in the retail sales data as 2.5 million Americans resumed employment.

A Reuter survey encompassing responses from economists found that they expect a 8 percent jump in the sales receipts. Nevertheless, the attractive bounce would cover only a quarter of sales drop incurred during the lockdown in March and April.

“What we’re monitoring really closely is everything related to consumption,” Luc Filip, head of private banking investments at SYZ Private Banking, told WSJ. “We consider that consumption will be the main driver for the recovery.”

On the flip side, Federal Reserve’s Chairman Jerome Powell will testify before the U.S. Congress at 10 am EDT. His pessimistic tone about the economy could offset a portion of optimism from the stock market, which may send Bitcoin lower, as well.

But overall, the cryptocurrency is eyeing a jump towards $9,800 as long as it can maintain a price floor above $9,500. An extended bullish action would bring it further closer to retesting the $10,000-resistance level.