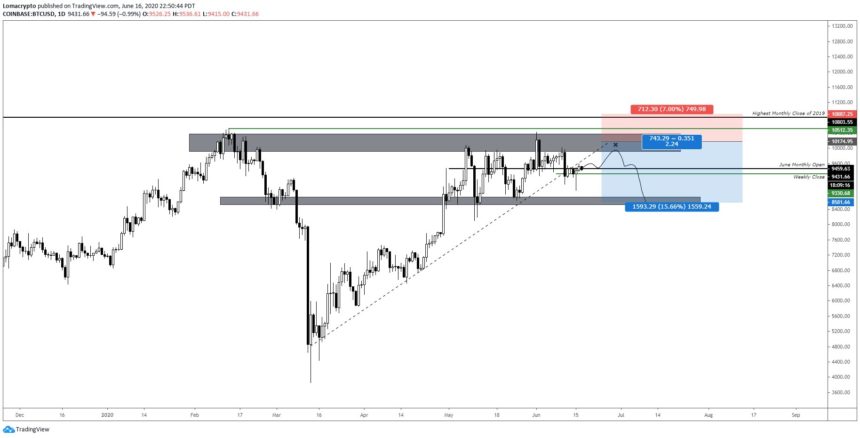 Bitcoin has continued to extend its multi-week consolidation phase. The crypto is currently hovering within the mid-$9,000 region and has not yet posted any sorts of trend defining movements.

It is important to note that there are a few factors emerging that suggest the cryptocurrency’s next big movement will favor sellers.

Despite being stuck in a bout of range-bound trading, the crypto has been forming lower-highs throughout the past couple of weeks. This has caused the upper-$9,000 region to be laced with heavy resistance.

Analysts are also noting that it is on the cusp of breaking below its range’s equilibrium level, which could be enough to spark a sharp decline that leads it down towards its range lows.

This potential decline would lead the benchmark cryptocurrency to shed nearly $1,000 off of its current price and could mark the start of a fresh downtrend – if bulls are unable to guard against this movement.

At the time of writing, Bitcoin is trading down roughly 1% at its current price of $9,400. The cryptocurrency did inch higher earlier today, pushing all the way up to $9,600 before facing a harsh rejection.

This rejection seemed to confirm that it does not currently have enough buying pressure to make a solid attempt at shattering the resistance that sits between $9,600 and $10,000.

If the crypto is able to navigate past this resistance region, it will then face another major hurdle, as bears have been ardently defending $10,500 over the past six months.

Bitcoin has posted three clear rejection at this level in recent times, which has put a bearish “triple top” pattern in play.

Analysts do not believe that this level will be easily surmounted in the days and weeks ahead.

One popular pseudonymous trader explained that he is looking to increase his BTC short exposure between $9,500 and $10,100.

The chart he offers indicates that he is targeting a downside movement towards $8,400, marking a $1,000 decline from its current price level.

BTC on the Brink of Breaking Below Its Mid-Range Support

Another respected analyst offered a chart showing that a break below Bitcoin’s monthly open at $9,400 would likely lead it to its mid-range support at roughly $9,300. If this level doesn’t hold, BTC could plummet towards $8,500.

“BTC: Below mid increases short probability, will look to increase position size upon trigger. Close above red level = invalidation. Looking at 9300 – 9350 as FTA – and will take some off,” he explained.