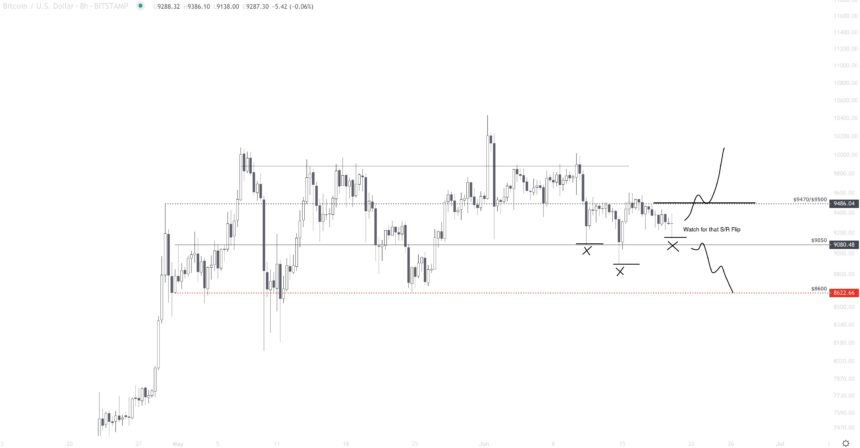 Bitcoin has seen waning demand over the past several days, with the cryptocurrency slowly inching lower as it continues trading firmly within its long-held consolidation channel.

Overnight, the crypto did face some heightened volatility that caused it to dip down to $9,100 before rebounding to over $9,400.

In the time since, however, the benchmark digital asset has been slowly inching back down towards the lower boundary of this range. How it responds to a potentially imminent test of its key support at $9,000 could determine where it trends in the weeks and months ahead.

One bear-favoring factor to keep in mind is the fact that data reveals that on-chain demand for BTC has been waning as of late.

There exists a plethora of dynamics that signal investor demand for Bitcoin has been plummeting, which could contribute to its subtle signs of technical weakness.

At the time of writing, Bitcoin is trading down roughly 1% at its current price of $9,300. The crypto has been trading around this level over the past few weeks, but it has been slowly grinding lower over the past 12 hours.

Buyers were able to guard against a dip down to $9,000 overnight, but its failure to post a sustained rebound in the time since seems to suggest downside is imminent.

Analysts are noting that the crypto’s current price region does provide buyers with a good opportunity to build exposure, and whether or not this catalyzes any upwards momentum should be telling as to how strong BTC’s bulls truly are.

“BTC LTF Update: Price slowly back down to around $9300 which was expected due to bulls not being able to flip $9500 on the previous retest and price showing distribution… Good wicks previously below $9200 as buyers step in, let’s see how well we hold up this time,” one analyst noted. These On-Chain Metrics Show Demand for BTC is Waning

According to a recent report from Arcane Research, Bitcoin’s Network Demand Score has reeled lower in recent times, being driven by weakening MRI, velocity, short-term spend, short-term fees, and more.

“MRI, velocity, short-term spend and short-term fees look weak. Notably, velocity has been trending down since mid- May, indicating a slowdown in transaction activity on the Bitcoin network. This favors more downside for bitcoin,” they noted.

All of this has caused the Network Demand metric to plummet, which is typically a sign that downside is imminent. Arcane Research explains that this latest adjustment marks an “inflection point” for the cryptocurrency’s fundamental strength, and it does seem as though further weakness is imminent in the days and weeks ahead.