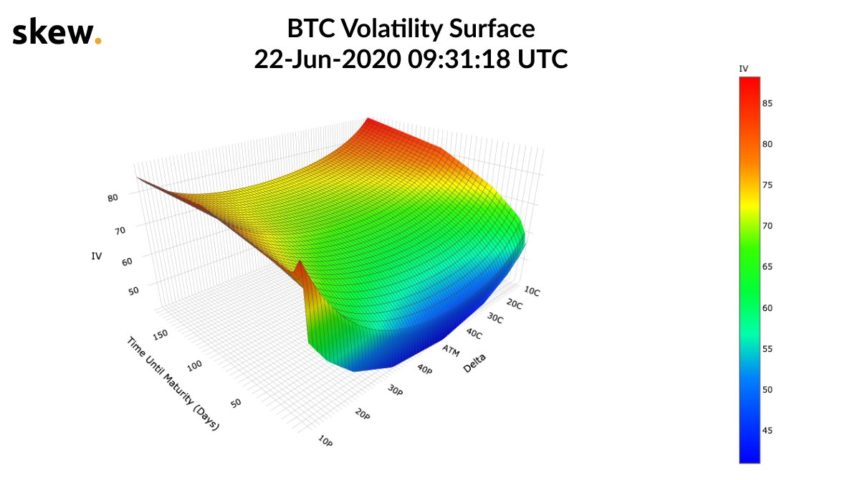 Bitcoin’s price action has been incredibly lackluster in recent times. Its consolidation channel was at risk of breaking yesterday, buy sellers ardently defended against BTC shattering the resistance it has in the upper-$9,000 region.

It does appear that the coming three days could be some of the most volatile the benchmark digital asset has seen over the past several months.

This possibility is rooted in the imminent expiration of outstanding Bitcoin options on June 26th.

As traders move to close their positions before the expiry occurs, it could spark some momentum that puts a firm end to BTC’s multi-week bout of sideways trading.

Analysts do believe that this is a strong possibility, and data seems to confirm it.

This comes as the cryptocurrency faces one of longest bouts of volatility it has seen in many months.

At the time of writing, Bitcoin is trading up 2% at its current price of $9,650. The crypto was able to rebound from recent lows of $9,200, but it still remains firmly range-bound.

Until bulls or bears are able to firmly push Bitcoin above $10,000 or below $9,000, its mid-term outlook will remain foggy.

One imminent event that could catalyze some massive volatility is the upcoming expiration of nearly $1 billion in options contracts that are set to expire on June 26th.

This will be the largest expiry the benchmark cryptocurrency has ever seen and is emblematic of the growing role that options are playing within the crypto market.

BTC’s volatility has been diving leading up to this event, with the crypto’s current “volatility surface” from analytics platform Skew showing just how flat it has been in recent times.

“Current Volatility Surface for Bitcoin… what will it look like after this week’s expiry, the largest ever?” This has also coincided with BTC’s 3-month realized volatility declining beneath its 3-month implied volatility for the first time in several months. Skew also spoke about this trend in a recent tweet, saying:

“BTC 3mth Realized Volatility about to drop below the 3mths Implied Volatility for the first time in several months as the week of Black Thursday disappears from the rearview mirror.” Bitcoin’s current stability is unlikely to last for too much longer.

One prominent data analyst explained why the imminent expiration of the $1 billion in outstanding BTC options is such a notable event, saying that it will likely spark some major volatility due to traders moving to close their positions just before the expiry takes place.

“In traditional markets, the underlying asset becomes more volatile close to the expiry of the options. This is due to traders trying to close their positions before expiry. Given the size of the current OI, it is expected that the market becomes volatile just before June 26,” he explained.