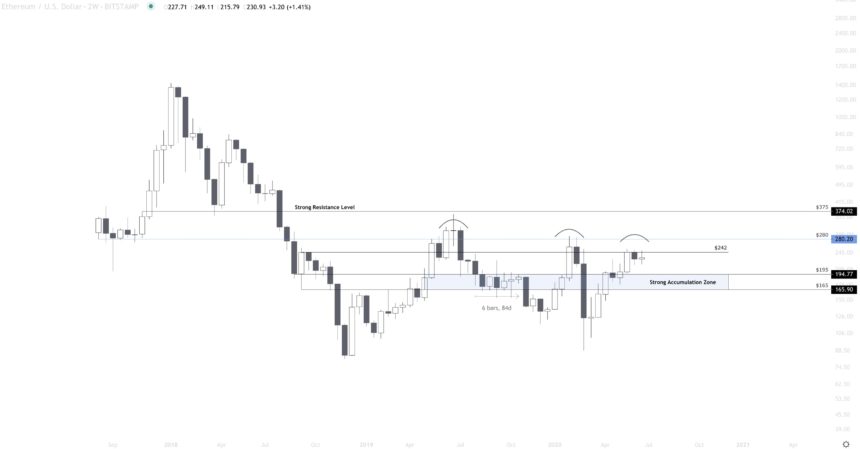 Ethereum has been struggling to recapture its long-held position within its trading range between $230 and $250.

The token has traded below the lower boundary of this range for the past several days, but bulls are now trying to surmount it.

It does appear that $230 has become a resistance level for the cryptocurrency, as it has tested this price on multiple occasions over the past day.

Some analysts are still convinced, however, that Ethereum remains well-positioned to see further upside in the days and weeks ahead.

One trader is specifically pointing to its ability to hold above $210 for an extended period as a significant technical development.

It may also be boosted by its ability to outperform many of its peers due to growing narratives regarding why it could soon see an influx of capital.

At the time of writing, Ethereum is trading down just under 1% at its current price of $229.

Overnight, the crypto’s price did slide as low as $227, but buyers were able to guard against any further downside and helped catalyze a sharp rebound.

It does appear that the lower-$230 region is becoming massive resistance for ETH. Yesterday, it broke above this level and traded around $231 for a few hours before facing an influx of selling pressure that led it lower.

This price action does indicate that sellers don’t want Ethereum to recapture its long-held trading range.

That being said, it has been able to hold above its high time frame support at $220. It is crucial that buyers continue defending this level. Maintaining above it could even catalyze further upside.

One analyst is now explaining that he remains bullish on Ethereum in the near-term, primarily due to its ability to hold above $210 for an extended period.

He notes that in the past, bouts of trading above this level have been short-lived.

“ETH HTF Update: Already starting to think that we are holding up pretty well in terms of HTF analysis, previously when PA has climbed above $210 we are swiftly brought back down with large volatile swings in price…this time seems different. Thinking we break $242 this month.” Luke Martin, a respected analyst and the host of the Coinist Podcast, explained that “in some ways” bullish Ethereum narratives are beginning to influence its price action.

He notes that its positive price action can primarily be seen while comparing it to other large-cap altcoins like XRP, Litecoin, and EOS.

“ETH outperformance started in May when very few altcoins were doing well… clear divergence between ETH and other large caps like XRP, LTC, EOS…etc…”

Bullish Ethereum narratives are primarily premised upon the imminent launch of ETH 2.0 and the booming growth in the DeFi sector.