Analyst: Chainlink to Aim for $10 in Q3 as Fundamental Strength Mounts 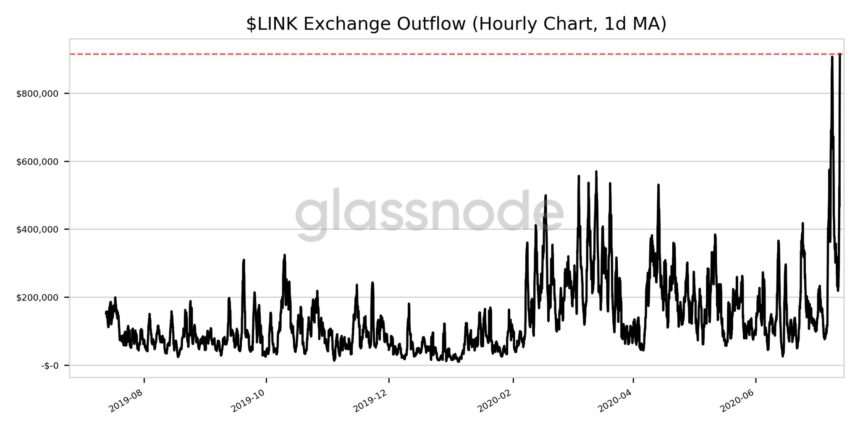 Chainlink has seen a monster-sized rally throughout the past couple of years, with its gains being unparalleled by virtually all other major altcoins.

This momentum reached a boiling point last night when the crypto surged to highs of nearly $8.50 before hitting some resistance that slowed its ascent and catalyzed a slight selloff.

It is important to note that the cryptocurrency’s uptrend is being driven by fundamental strength, and on-chain data suggests that it could mark a long-lasting trend.

The balance of LINK on exchanges has been on the decline throughout the past several weeks and months, and exchange outflows for the token just hit a fresh all-time high last night.

This signals that investors are taking a long-term approach to their Chainlink positions and may not be apt to offload them for quite some time.

At the time of writing, Chainlink is trading up marginally at its current price of $7.42, marking a notable decline from daily highs of just under $8.50.

The resistance at this level did prove to be insurmountable for buyers, and the crypto has been sliding lower ever since.

That being said, LINK still appears to be incredibly strong while looking at its short-term price action, as it is still trading well above its 24-hour lows within the $6.000 region.

Over the past week, it has been able to incur a steady uptrend as well, climbing from lows of $5.60 that were set just a few days ago.

This price action has come about independent from the rest of the cryptocurrency market, as Bitcoin is currently trading sideways within the lower $9,000 region.

BTC’s consolidation phase appears to be providing an ideal backdrop for altcoins to rally against, as many have been able to post significant gains over the past couple of weeks.

Although market-wide pumps seen amongst altcoins are often followed by intense declines, Chainlink may be able to avoid any potential retrace due to its fundamental strength.

Data from Glassnode shows that LINK exchange outflows hit an all-time high yesterday evening, signaling that investors were moving their tokens away from exchanges and into cold storage wallets. This is typically a sign of an asset’s investor base taking a long-term approach to their positions.

Analyst: LINK is Poised to Rally Towards $10 in Coming Months

One popular cryptocurrency analyst explained that he believes Chainlink is well-positioned to rally towards $10 by the end of the year.

“LINK HTF Update: Pretty much perfect retest of $4 which was what I was originally looking for over the past 2 months… Currently up over 100% in the past month, probably going to be aiming for $10 this year,” he said. Because Chainlink appears to be in a full-fledge price discovery mode, there’s no telling as to just how far it may surge before losing steam.