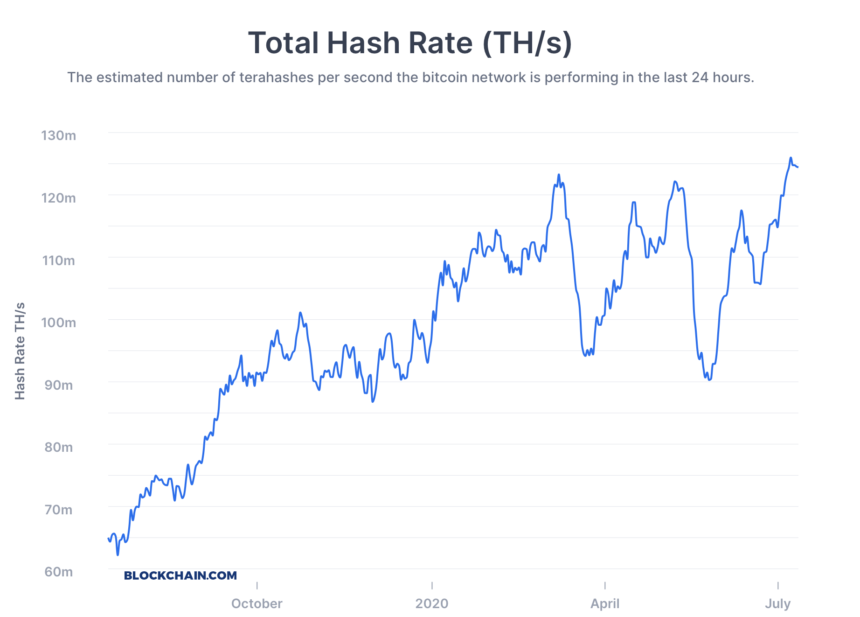 Bitcoin’s recent mining rewards halving that took place just a couple of months ago went off without a hitch and has had a negligible adverse impact on the dynamics seen amongst the cryptocurrency’s miners.

This comes despite what many analysts had previously believed, as some had been calling for an imminent “hash rate death spiral” that would be induced by the event.

Despite this, BTC’s hash rate was able to surge to a fresh all-time high yesterday and isn’t showing any signs of spiraling lower any time soon.

Now, one prominent investor and Bitcoin advocate is noting that he believes hash rate precedes price – with this being a positive sign for BTC’s near-term outlook.

He also notes that the growth this metric has seen elucidates a collapse in confidence for fiat currencies.

The block rewards reduction that took place in May hampered miner’s profitability and led some analysts to suspect that it would cause many smaller miners to capitulate.

Shortly after the event occurred, Bitcoin transaction fees rocketed temporarily, helping alleviate some of the pressure that was placed on miners.

Although these fees have since declined, miners do not appear to be shutting off their rigs, as BTC’s hash rate just hit a fresh all-time high this weekend.

Data from blockchain.com shows that this metric peaked at just under 126 million TH/s, marking a massive climb from its one-year lows of 62 million TH/s. This is a sign that the cryptocurrency’s network is incredibly healthy and is also a testament to its underlying strength.

Max Keiser, the host of the Keiser Report on RT and a prominent Bitcoin investor, explained in a recent tweet that Bitcoin’s price tends to follow its hash rate, which could mean that it is woefully undervalued at the present moment.

He also explained that the growth this metric has seen points to a collapse in the global population’s trust in fiat currencies.

“Hashrate precedes price. Bitcoin price – not that important – as Gold price is not that important since both BTC and Gold trade inversely with the USD. BTC hashrate increasing shows confidence in fiat money collapsing. Soon, BTC will actually be drawing energy away from fiat,” he said.

As the money printers continue spewing out paper, it is likely that the public’s trust in fiat currency will only degrade further, providing Bitcoin with a significant boost.