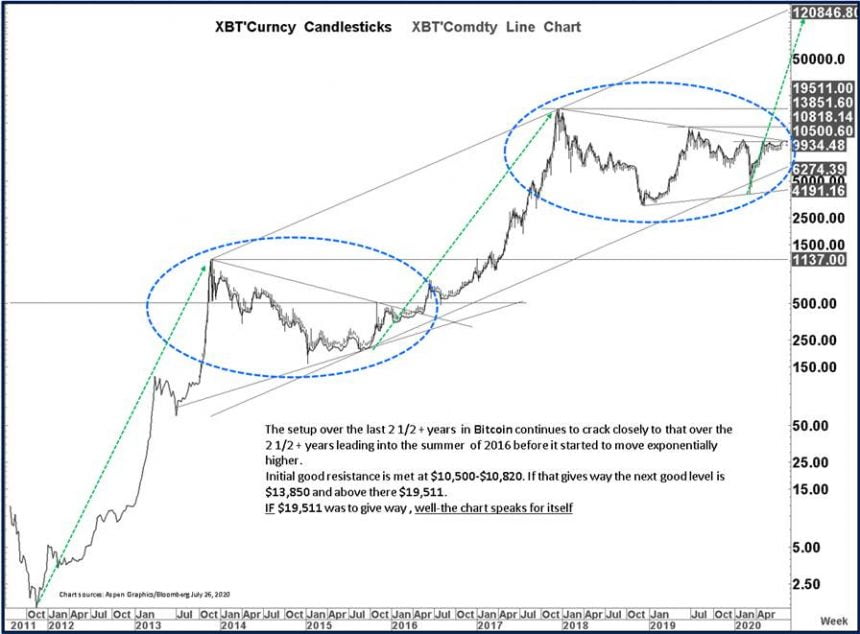 A Bitcoin chart with links to Citibank, a global banking giant, envisions the cryptocurrency at over $120,000.

First shared by Alistair Milne, the chief investment officer at Altana Digital Currency – a Monaco-based crypto fund, the image depicts BTC/USD in a long-term logarithmic uptrend. It highlights the cryptocurrency’s major breakout moves from late-2011 and mid-2016 as fractals to predict its future price. Excerpts:

“The setup over the last 2.5 + years in Bitcoin continues to crack closely to that over the 2.5 + years leading to the summer of 2016 before it started to move exponentially higher.” Mr. Milne claims that strategists at Citibank delivered the bullish Bitcoin chart to CitiFX Wire, a service that feeds Citi’s clients via a so-called “DeskTalk.”

The Citibank’s alleged involvement with Bitcoin appears at a time when the cryptocurrency is rallying on the growing demand for safe-haven assets. The BTC/USD last week surged from as low as $9,100 to top near $10,333 as of today. Its rally appeared alongside that of gold, a traditional hedging asset that established its all-time high today. Both it and bitcoin surged as the US dollar slipped to its two-year low – and yields on the US Treasury fell in tandem.

Kyle Bass, the chief investment officer of Texas-based Hayman Capital Management, also repeated the same bullish stance, adding that “the sheer amount of money printing going on around the world” would push the prices of silver, gold, and bitcoin higher.

As Citibank and others see BTC/USD breaking out towards an all-time high, some are still skeptic about a full-blow price rally.

Peter Schiff, the CEO & co-founder of Euro Pacific Management, highlighted Bitcoin’s ability to sustain an uptrend above $10,000 in over the last 12 months. The cryptocurrency’s last attempts to hold a six-figure region ended up in a 15 percent and 63 percent downside moves in June and February 2020, respectively.

Meanwhile, the possibility of BTC/USD correcting below $10,000 has also grown higher due to a gap in its CME futures chart. Historically, traders go back to fill the missing candle. As of now, that gap is at $9,925-9,665 range.