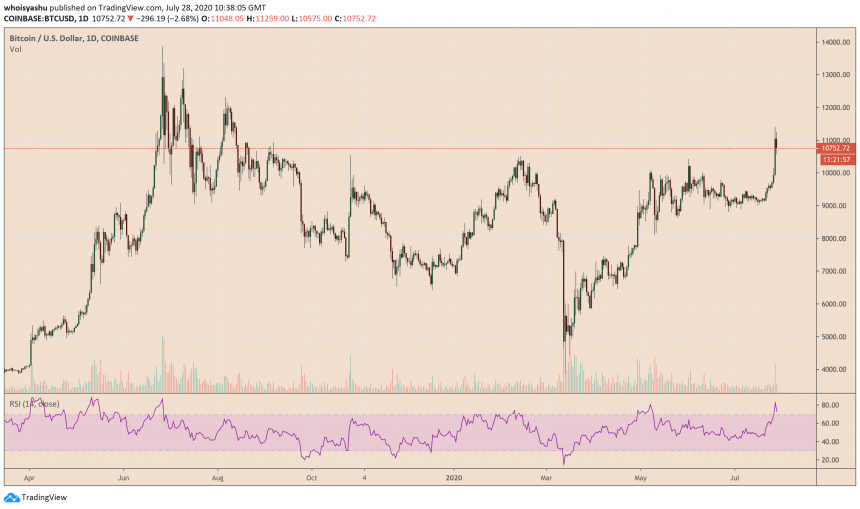 The price of Bitcoin dropped by more than 2.5 percent in the first hours of the London trading session Tuesday on profit-taking sentiment. The BTC/USD exchange rate climbed more than 11 percent to hit a year-to-date high of $11,420 on Monday before retreating back by 2.83 percent to $10,736 a day later. The pullback reflected traders’ inclination to liquidate their positions at the said price top.

Incidentally, Bitcoin’s intraday price trend mirrored that of gold, a rival safe-haven asset. Like the benchmark cryptocurrency, the precious metal too corrected lower upon hitting its all-time high of $1,980.57 an ounce. That was partially due to a growing correlation between gold and Bitcoin, according to data fetched by Skew. The proximity between the two left Bitcoin exposed to the macro fundamentals that drive gold prices.

In the short-term, the precious metal looked towards extending its rally owing to a weaker US dollar sentiment, central banks’ open-ended stimulus programs, and rising fears of inflation among investors (the real yield on US 10-year Treasury fell into the negative zone).

Earlier today, analysts at Citi also raised their upside price target for gold to $2,100 an ounce. It may help Bitcoin sustain its bull run, as well.

Amid the bullish woes, strategists at JP Morgan warned about an imminent downside correction in the gold market.

The analysts said in a report Monday that the precious metal is nearing its peak level. Such moves, especially after a 28 percent rally, amounts to a pullback. Excerpts:

“Gold will likely see one last hurrah before prices turn lower into year-end.” The bank added that they are still not bearish on gold as they confirmed adjusting their bias to neutral, instead. Meanwhile, Wayne Gordon, executive director for commodities and foreign exchange at UBS’s wealth management unit, also noted that gold cannot rise forever.

At best, the precious metal would rise to $2,300 but risks correcting should central banks limit the pace of their easing programs.

A less appealing safe-haven market would serve as a backdrop for the next Bitcoin correction, so it appears. Nevertheless, it is also likely for the cryptocurrency to establish crucial support above the $9,000-10,000 region.

JP Morgan added that the Federal Reserve will attempt to keep inflation below 2 percent. That would further cool down the ongoing safe-haven rallies.