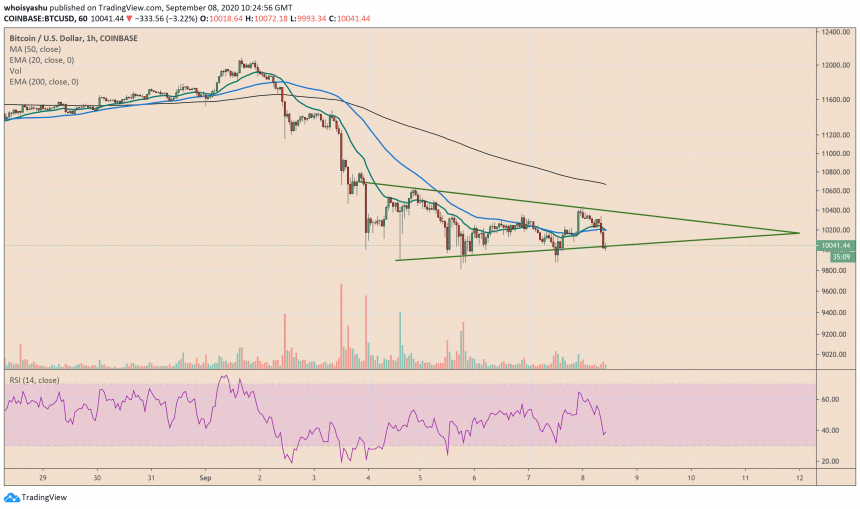 Bitcoin briefly lost its balance near the $10,000-support on Tuesday as traders remained jittery about its recent fall from $10,500.

The BTC/USD exchange rate fell to an intraday low of $9,993, down 3.68 percent from its opening rate. The latest sell-off appeared on the backs of a stronger US dollar. The greenback rose 0.32 percent during the early morning London session. The plunge in Bitcoin prices also appeared in tandem with traditional markets. For instance, futures tied to the S&P 500 fell 0.53 percent in premarket trading. Tech-savvy Nasdaq Composite, too, slipped by 1.27 percent. On Monday, the US market was closed for the Labor Day holiday.

Bitcoin and the US stocks formed an uncanny correlation since the March 2020’s infamous global market rout.

Traders who suffered losses in the equities managed to raise cash by selling whatever profitable assets they were holding at that time. Observers believe that covering margin calls played a key role in sending the BTC/USD down by around 60 percent.

The fractal hinted a repetition in September 2020. With no obvious external trigger that may have caused the US stocks to retreat, analysts noted that a majority of firms–especially the tech-focused ones–have been trading at highs that are multiple of their actual earnings. That may have triggered a short-term downside correction. Meanwhile, Bitcoin, which was trading more than 200 percent high from its mid-March low, behaved as a balancing agent for portfolios that may have suffered from the tech stocks retreat. That eventually raised the value of the US dollar.

“In the weeks to come, investors should be cognizant of movements in the stock market as a supplement to on-chain fundamentals in determining the expected behavior of BTC and crypto markets in general,” wrote Glassnode in its latest weekly report.

If the Bitcoin-S&P 500 correlation persists, then the cryptocurrency is likely to tail the US benchmark index to its falls and rebounds. And so far, the outlook is looking grim for equity investors.

Analysts at Goldman Sachs noted that the S&P 500 and the Cboe Volatility Index are rising in tandem. That is unusual because of their inverse correlation with one another. The last time these metrics joined hands was before the 2000s dot-com bubble.

That allowed Goldman analysts to predict a bubble-like scenario in the current stock market rally, as well.

“What is particularly unusual this time is that realized volatility on the index has remained low (in part because of negative growth-value correlation), with 1-month realized vol at just 11%, so the increase in volatility is coming in the form of elevated vol risk premium,” they said.

Bitcoin, on the other hand, anticipated a move towards $9,600, a level that coincides with a missing candle on CME’s Bitcoin Futures chart. Traders believe BTC/USD will fill the said gap owing to its history of passing through them almost 9 out of every ten times.

A fall in the US stock market may propel BTC/USD towards the said level.