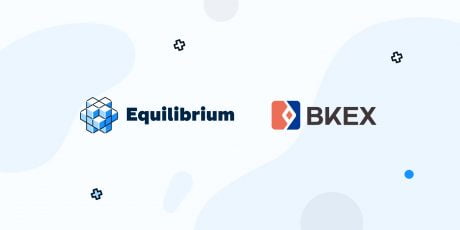 Equilibrium – the first decentralized interoperable money market – and BKEX, a global first-tier digital asset exchange, have announced their partnership today. BKEX Capital, a venture arm of the BKEX exchange, has participated in the NUT/EQ token swap conducted by Equilibrium.

Alongside BKEX Capital there are other institutional investors participating in the token swap, including Taureon, PNYX ventures, Signal Ventures, and YBB Foundation. The NUT/EQ swap is an unusual token distribution round. It’s the first time when the DeFi project offers to swap existing tokens (tradable on the open market) for newly issued tokens. Since Equilibrium’s value proposition promises to fill a key role in unlocking the DeFi market’s full potential, expectations are high that holding EQ tokens will pay off.

While the bulk of the token allocation for the swap has already been secured, 17% remains available. Both retail NUT holders, as well as venture funds, have participated in the swap. Users who swap over 5,000 NUT have the opportunity to receive a special bonus, while the retail swap rate is already generous with a rate of 1 NUT: 75 EQ. One week remains until the end of the swap on September 29.

A preeminent exchange, BKEX is currently the world’s first digital asset trading platform based on community consensus, which perfectly combines the high performance of a centralized exchange and the high reliability of a decentralized public chain, providing 85 types of digital currency trading services and 100 high-quality currencies, such as BTC, ETH, EOS, NEO to the world. BKEX counts a daily transaction volume of over 1.8 Billion USD.
Coin currency transactions, C2C transactions, mortgage lending, currency deposits and interest deposits, and current currency deposits have been opened; options, leverage, contracts and other functions are soon to be launched. Relying on the BKEX public chain, the platform can achieve safe storage of digital assets, project crowdfunding, asset distribution, and build a DPOS-based super-node decision-making system.

Solving the fragmentation of the DeFi market

Equilibrium is the first decentralized cross-chain money market that combines pooled lending with synthetic asset generation and trading. Equilibrium believes that DeFi’s potential has not yet been reached, on the contrary, the currently fragmented market needs to be enabled and connected to reach its potential. For that, blockchains must be truly interoperable.

That is exactly what Equilibrium is achieving with its expansion, building on Polkadot’s technology, and its new product line. On Equilibrium, users will be able to pool and trade multiple assets from any other major blockchain in one convenient place, on one interface, thus achieving maximum liquidity. Its system stability and liquidity will be ensured by a foolproof 3-layered risk management system that proactively solves bad debt, avoids the risk of forced auctions in adverse markets, and thus prevents the kind of situation experienced by MakerDao this Spring.

“By offering non-custodial pooled lending across blockchains, Equilibrium is filling a missing link with its services, which will connect major assets and protocols to empower global digital asset trading. BKEX recognises this, which is why we have invested in Equilibrium’s new EQ utility token in its token swap and will also be listing it on BKEX when the token is generated at the TGE in October.”