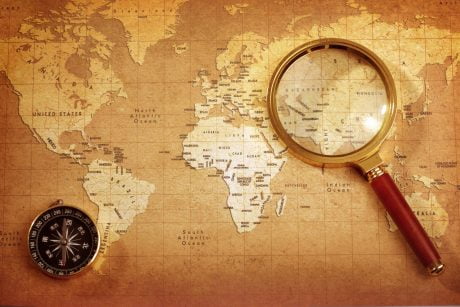 Bitcoin was designed to share several key similarities with gold, but the end result was an all-digital asset that does what the precious metal does best even better and then some.

Eventually, the first-ever cryptocurrency could share a similar-sized market cap as the precious metal has currently, and one of the crypto community’s best chartists has outlined the path on how Bitcoin could get there and when.

Bitcoin is a difficult asset to assign a fair market value. Its value is primarily speculative in its current state, making is susceptible to violent price swings as price discovery takes place.

The network effect of Bitcoin as a technology slowly being adopted keeps its price growing exponentially over a logarithmic growth curve.

Glancing at a Bitcoin price chart on a linear scale looks like a classic bubble up until recently. But the switch to log scale instead shows a clearly tightening curved channel.

The volatility between the top and bottom bands reduces over time as the technology is increasingly adopted.

Bitcoin might match the market cap of gold. He has in the past used it to successfully time Bitcoin’s bottom around $3,200, and the peak in 2019.

The precious metal’s market cap is $9 trillion according to the analysts, but conflicting reports from Fidelity Digital Assets claim it to be as high as $12 trillion recently, in a report highlighting how Bitcoin might perform next to stocks, metals, and more.

Regardless of the exact figures, Bitcoin would need to pull a “40x” to reach the market cap of gold, give or take a few billion. And when this will happen, will be some time between 2030, and 2040 according to the lowest and highest boundaries of the analyst’s log chart.

Bitcoin: Digital Gold Is Better Than The Original In Every Way, Here’s Why

The same log growth is visible on the XAUBTC price chart putting Bitcoin up directly against the original safe haven asset.

The gold versus BTC price chart also shows the cryptocurrency’s network effect in action, rapidly outperforming gold in the 12 short years the Bitcoin core code has been running.

Digital gold beats regular gold in just about every way and recently has been proving its value during the pandemic.

The no contact necessary asset can be stored without taking up any space, free of the reach of thieves or the government, and it could in theory hold value better than both fiat and gold in the long term.

Its lack of a physical state would have saved the Dutch a fortune and a ton of time. Recently, the Dutch Central Bank moved 14,000 gold bars and boxes and boxes of gold coins.

It took 22 hours and armed forces to move it securely only 20km. Planning it and coordinating such action also would have taken a significant amount of time and effort.

Planning it would require just a thought, and executing the transaction just a few clicks.

In a recent scenario where $1 billion in BTC was sent related to a Silk Road wallet, for example, the transaction fee was roughly $14 worth of Bitcoin or 0.00087980 BTC.

The transaction is also completely verifiable for authenticity without the need for a detailed inspection. Bitcoin does this for you, whereas you can be certain the gold was inspected closely for any evidence of tampering or counterfeits, even despite the armed convoy.

As more investors, hedge funds, institutions, and even eventually central banks realize these benefits and the cost and time savings that cryptocurrency can afford them, there will be no stopping capital from gold to further flow into Bitcoin, and help to achieve the nearly $10 trillion target the chart maps out.

A $10 trillion market cap, at the circulating supply of BTC, would take the asset’s price to around $500,000 per BTC.

The total amount lines up with several top experts outside of the analyst we’ve put a spotlight on here, such as Tim Draper and Max Keiser.