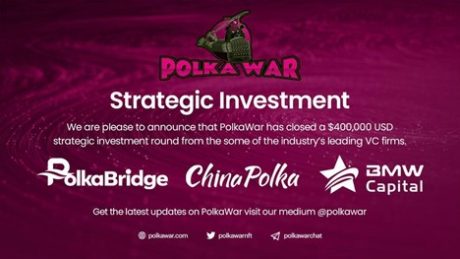 PolkaWar, an upcoming NFT-based fighting game, announces that the company has secured $400,000 in funding from the strategic partners at ChinaPolka, BMW Capital and PolkaBridge in an exclusive private-sale round, which was conducted earlier this month.

Great interest and fervor have been shown by each investment team for the project’s highly anticipated NFT + Gaming multiverse, and they remain eager to support PolkaWar’s future within cryptocurrency. PolkaWar anticipates more enthusiasm towards early investments from institutional and organized funds and the company thanks everyone for their patronage and support thus far.

The capital that has been raised will provide the ability to deliver on the roadmap rapidly, and deploy the project in a condensed period of time. NFT & gaming subfields on a myriad of blockchain networks are starting to heat up, and PolkaWar is uniquely positioned to benefit from this upcoming surge and euphoria. The company will move aggressively and without respite, having now secured $400k in funding from some of the most respectable investment firms within the crypto-sphere.

With great appreciation and gratitude for the individual cryptocurrency investors that have shown support, PolkaWar will also be offering an Initial Decentralized Offering (IDO).  These IDOs will be held on a number of different launchpads to provide an opportunity to participate in the project and invest in its future. The dates and procedures will be announced in a timely manner, so stay tuned!

PolkaWar is planning to build the future of NFT-based gaming platforms by creating a detailed and fascinating multiverse, where players can battle amongst one another.  The platform will also feature an NFT-marketplace, allowing players to buy, sell or rent their weapons, along with apparel and characters.  In addition, we have designed a revolutionary one-of-a-kind system to redeem Polkawar NFTs to real-life replicas, deliverable anywhere in the world on request. This adds an interesting dynamic to the project, as people are likely to better relate and develop a bond with a tangible form of NFTs.