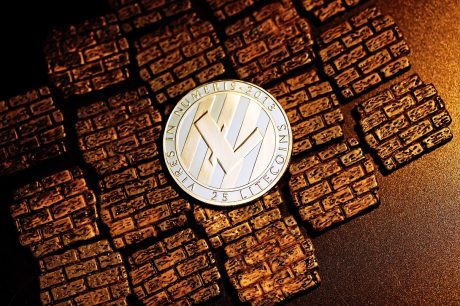 The creator of Litecoin, Charlie Lee, continues to guide us through memory lane. For part one, he took us through Litecoin’s fair launch. Considering the small number of projects that have managed to do this, it’s a pretty big achievement. Today, for part two, we’re going to cover the project’s relation with cryptocurrency exchanges. Charlie Lee wears his heart on his sleeve for this one, and tells a heartfelt story that ends up in betrayal. Can you feel the excitement in the air?

This part of the story is all about relationships, connections, and the long road to credibility. It’s also about Charlie Lee’s resistance and willpower.

Before we get into the meat and potatoes of the story, though, a light detail that shouldn’t go unnoticed.

There’s not much story to the logos, but it’s cool that Charlie Lee gives credit where credit is due. The first and the second one show evolution:

The second logo was designed by @mjbmetals. I still like that quite a lot. It looks well next to that Bitcoin logo.https://t.co/T5hzEldonI pic.twitter.com/Uy5qpl8JUP

And the final one is a simplification of the second one:

And the current logo is designed by Robbie Coleman (@robertfcoleman) and his team.

Of course being decentralized, there are many other logos that people have created and used. Some are pretty wacky. And people can use whatever logo they want and I can’t do anything about it. 😂 pic.twitter.com/M7FgBcGPum

That being said, let’s get back to the story.

This contradicts the title, but, in 2011 Litecoin was immediately listed in the defunct BTC-e. The site was a pretty successful cryptocurrency exchange that fell into disgrace when the US Justice Department accused them of laundering funds from the Mt. Gox hack, but that’s another story. Regarding Litecoin, Charlie Lee tells us that the listing, “helped a lot as miners had access to liquidity pretty quickly. Litecoin quickly become one of the most popular coin on BTC-e.”

From 2011 to 2013, I spent a lot of time supporting Litecoin’s early growth and pushed for adoption wherever I can. I pretty much talked to all the exchanges to support LTC. I realized that liquidity is super important for a coin. Without liquidity, you can’t do anything.

However, even though Lee “pretty much talked to all the exchanges to support LTC,” it was two years later that the second one listed Litecoin. Bitfinex took a chance on the nascent project, “This was a huge deal for Litecoin. It’s the first major exchange to support LTC.”

At the Bitcoin 2013 conference, I remember attending a talk by Bitstamp Co-Founder and CEO Nejc Kodrič( @nejc_kodric). During the Q&A after the talk, I asked him if Bitstamp will add Litecoin. I think he just chuckled and went to the next question.

Then, Charlie Lee remember how he tried to get the CEO of Bitstamp to list them and he laughed him off. Only to list the coin in 2017. The same thing happened with BitPay, who ended up supporting Litecoin only this year.

The Chinese exchanges, though, listed Litecoin from the beginning. “Sometime late 2012 to early 2013, 2 of the largest exchanges in China, Okcoin and Huobi, added support for LTC. That was huge.” A question arises, did Charlie Lee have to throw shade at those two exchanges this hard? “The trading volume was also pretty crazy, but unclear how much of that was fabricated.”

In 2013, I thought it was time for me to step away from Litecoin. I was very fortunate to find Warren Togami (@wtogami), Founder of the Fedora Project, to take over as Litecoin lead developer. Warren is amazing and we were very lucky to have him at the helm of development.

So, in 2013 Charlie Lee steps down as Litecoin’s lead developer and leaves the job to Warren Togami. At the same time, he leaves a high-paying job at Google because they weren’t interested in anything crypto-related. That’s when Coinbase gets into the picture. Lee contacts them to see if they’re interested in listing Litecoin and they end up hiring him instead.

I interviewed at Coinbase and on paper, it sounded like a horrible deal. I would have to commute to SF, which was an hour each way, take a 50% or so pay cut, work twice as hard, and miss out on all the Google perks. But it was a no-brainer for me.

According to Charlie Lee, “Coinbase was the hot startup and THE crypto company that is making Bitcoin easy to use. I knew that if Bitcoin didn’t succeed, Litecoin wasn’t going anywhere either.” A cold hard truth that all of the Altcoins have to live with to this day. Besides that, Lee wanted to eventually convince Coinbase to support Litecoin. How could he not?

But at least he created a cool banner for it. 😁https://t.co/7BToh7YNdX

After that, there were rumors of @MtGox finally adding its second coin, Litecoin. At the time MtGox had like 97% of the total Bitcoin trading volume. Support of LTC would be huge for Litecoin’s liquidity. pic.twitter.com/rfBhA7z1Pm

The Chinese connection paid off and the BTC China, lead by Charlie Lee’s brother, listed the coin. “Although it was a huge news, what took him so long?!,” asks Lee hilariously. Also notice that the banner that he mentions plays on the fact that Charlie and Bobby are brothers.

In 2015, there were rumors that the infamous Mt. Gox exchange was going to list Litecoin. At the time, this was THE place to be. Charlie Lee finally confirms the story, “The rumors were actually true. I was talking to the CEO, Mark Karpelès almost on a daily basis in mid 2015.” However, the Mt. Gox hack was exposed before they materialized those plans. And all hell broke loose. “In hindsight, it was a blessing in disguise.”

Then, as it happens, things turned sour in the Charlie Lee and Coinbase romance.

That changed though in 2016. The was when Litecoin trade volume exploded on Chinese exchanges and it was clear to me that Coinbase was leaving a lot of money on the table by not supporting altcoins. And it made business sense for Coinbase to add altcoins.

The Brian Armstrong tweet he refers to says: “Ripple, Stellar, and Altcoins are all a distraction. Bitcoin is way too far ahead. We should be focused on bitcoin and sidechains.” Wow. What would the Brian Armstrong of the present say about that statement?

Anyway, in 2016 Litecoin’s trading volume was exploding in the Chinese exchanges and Charlie Lee saw his opportunity. “This was also when Ethereum was starting to get big. So I put together a proposal to Brian and Fred Ehrsam to add both LTC and ETH to Coinbase.” The proposal’s thesis was that, since people in the US had no easy way to buy, store, and trade those coins, there was “a lot of unsatisfied demand.” And Coinbase could make a lot of money.

There was a lot of unsatisfied demand. People in the US had no easy way to store and trade these coins. And Coinbase would steal a lion share of the demand if we added the 2 coins to start.

Both Brian and Fred like the idea but they crossed out LTC. They just want to do ETH.

Here it is: betrayal. The two Coinbase executives broke Charlie Lee’s heart by accepting the proposal, but only for Ethereum. “Although I went along with the plan, it kind of rubbed me the wrong way. Litecoin had a much higher global trade volume at the time and was the #2 coin in marketcap.” A little while later, Lee took three months of Coinbase to focus on his project.

In the next episode, Litecoin’s story intertwines with Bitcoin’s and the controversial Segwit implementation. We’re going to discover that Charlie Lee and his team were instrumental in this. How? Tune in to find out.

Featured Image by Executium on Unsplash – Charts by TradingView