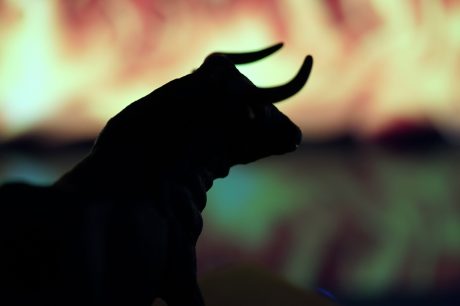 After closing its best highest week since its inception, the bulls remain in control of the price of Bitcoin. At press time, BTC’s price trade at $61,386 with a 3.8% profit in the daily and a 12.3% profit in the weekly chart.

In the crypto top 10, only Dogecoin (DOGE) and Binance Coin (BNB) have outperformed Bitcoin as this asset’s dominance over the crypto market continues to rise.

The general sentiment amongst traders and operators seems bullish with potential FOMO coming in the coming weeks if Bitcoin can score a new all time high beyond $64,500.

As the chart suggest, there seems to be a correlation between Bitcoin and its social media sentiment. When the metric experiences sudden spikes, BTC’s price trends to the downside most likely driven by short-term investors that enter the crypto market to make a quick profit.

(…) traders are showing a surprisingly low level of excitement. With euphoric commentary being tempered, it’s a good sign that prices can break records in the near future without #FOMO halting momentum.

On the possibility of BTC’s price returning into uncharted territory, Charles Edwards, founder at Capriole Investments, reiterated his bullish stance.

As NewsBTC reported, two months ago when Bitcoin was trading at $45,000, Edwards reported that his Hash Ribbons indicator went bullish. Used to track BTC miner activity, this indicator flashes a buy signal when a capitulation event has concluded leading into a rally.

On this occasion, Edwards showed the Market Value to Realized Value (MVRV) indicator, a metric used to measure if BTC’s price is at under or over value, has reached 3.0.

As seen below, when Bitcoin’s MVRV stands at these levels, it has usually followed with a rally. In 2013 and 2017, the chart indicates, BTC’s price reached its all-time high prices in the coming months after the metric entered its current levels.

In the short term, bulls could face some headwind as the derivatives sector start to heat up. Analyst Ali Martinez records a 5-month high in BTC Futures Open Interest standing at $22 billion.

Related Reading | TA: Bitcoin Gearing For Lift-Off to $65K: Rally Isn’t Over Yet

In addition, on-chain activity declining in combination with a 98.34% of BTC’s total supply at unrealized profit suggest potential downside risk, as Martinez added.