StackSwap Completes $1.3 Million Round To Implement The World’s First DEX On Top Of The Bitcoin Network 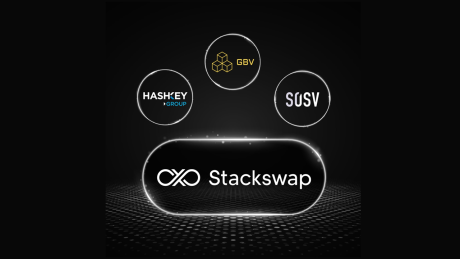 StackSwap’s plans to launch the first decentralized exchange on the Bitcoin network just finished their first private round. After raising $1.3 million, with a leading investment from the Stacks Foundation, and major international investors such as HashKey, Genesis Block Ventures (GBV), and SOSV, the project is set to launch in November.

The partners were drawn to the initiative due to their common vision of making Stackswap the biggest decentralized exchange deployed on top of the Bitcoin network. The platform will be powered by the Stack Protocol and its Stack PoX mechanism to operate with a direct connection to the Bitcoin blockchain.

Conceived to run as a second layer solution using Bitcoin as layer 1, the Stacks mainnet will introduce smart contracts functionalities to BTC expanding its utility and use cases. Unlike other DeFi projects, Stackswap’s DEX will leverage Bitcoin for its true decentralization and security.

Thus, it will provide users with a unique platform that will hold 1:1 parity to the underlying blockchain via Stack’s PoX consensus mechanism. Upon its launch, the Stack Protocol will host the world’s first Bitcoin DEX by combining the advantages of both networks.

This is poised to transform the DeFi sector, where Ethereum, Solana, Binance Smart Chain, and other blockchains have maintained a predominant position. Now, Bitcoin can leverage for the users for an innovative use case and to transcend BTC’s traditional use as collateral in the form of synthetic versions known as Wrapped Bitcoin.

The surge of Stackswap and its Bitcoin DEX marks the beginning of a new stage for the network. Already the dominant asset in the crypto market, the benchmark crypto and its ecosystem could disrupt the DeFi sector with the Stack power DEX and take the network to the next level.

We are very happy that Stackswap will be able to engage with a wider scope of audience and institutions on our new trading platform through this investment. We have a very competent global team of professional developers who have researched and have had extensive experience with the DeFi and related systems for a long time.

Stackswap Brings The Know And The Innovative For Bitcoin DeFi

The DEX will support the features that made Uniswap one of the most popular platforms in the Ethereum DeFi. Users will be able to trade tokens and do liquidity mining on their favorite assets. In addition, the DEX running on Bitcoin will offer new features.

Stackswap will offer entrepreneurs a Launchpad to create and deploy their own tokens, create liquidity pools, and execute PoXL mining with a never-before-seen Bitcoin-based reward payment system on an easy-to-use interface that removes the friction associated with this process. Much of the code and manual work needed to launch a project on a blockchain has been automatized.

Therefore, any team looking to get a start on a project will have an accessible entry further boosting the growth of the Stacks Protocol and Bitcoin ecosystem. On top of that, entrepreneurs will have access to financial support via the Launchpad’s automated mechanism which allows the platform’s VC partners to quickly review and invest in a project.

How Stackswap Will Usher A New Wave Of Adoption For Bitcoin

The Stacks Protocol and the Stackswap launchpad already host many initiatives, such as the Stacks Accelerator. Backed by prominent Bitcoin Maximalist looking to implement DeFi capabilities into Bitcoin.

Another major partnership was consolidated with the city of Miami to launch MiamiCoin. A project aimed at bringing a fresh revenue stream for the city without having to excerpt pressure on its citizens.

Stackswap has been backed by major investment firms besides the ones that supported it in its private rounds, such as Coinbase Ventures and Winklevoss Capital. As the first project greenlighted by the U.S. SEC for a token sale, the Stacks Protocol enjoys vast legitimacy.

With an estimated value of $100 billion at its peaked and high institutional demand, the DeFi sector is one of the hottest trends in the crypto space. By deploying the first DEX on Bitcoin, Stackswap will open an uncharted track for the ecosystem to reach the mainstream and potentially perceive a new wave of adoption.