Gifting of Virtual Land on Earth 2 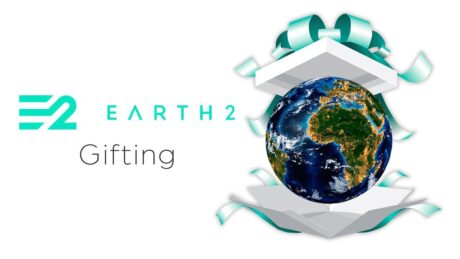 Just in time for Christmas, Earth 2 has launched its new gifting feature, allowing players the ability to send ownership of unique virtual land tiles of any geolocation on earth.  Virtual land on Earth 2 directly corresponds to exact locations in the real world making each piece of land, including the sole ownership of that land, completely unique.

What does gifting bring to Earth 2?

The gifting feature will not only make it easier for the welcoming of new players into community driven land projects, such as MegaCities, but also serves as an interesting and different type of gift experience which provides the recipient with direct ownership of land at the starting point of Earth 2’s metaverse, the largest virtual land registry in the world in both size and diversified ownership.

Earth 2 predicts the metaverse to be a constantly growing and evolving concept, much like the Internet, and with this ongoing expansion, the number of possible use cases and functions for virtual land inside the metaverse will continue to grow.

“Empowering players with more agency over the utility of their land, beyond trading, is a natural progression towards the futuristic, player-driven metaverse envisioned by Earth 2”, said Earth 2 Founder, Shane Isaac.  “Irrelevant of the occasion, virtual land makes for a very different, interesting and unique gift, on so many levels.”

Players of Earth 2 have already begun discovering such versatility, with one player taking advantage of the new feature, in his own unique way, to create a virtual memento of the exact location where his engagement proposal took place.

“I proposed in front of thousands of people before watching the Nutcracker at the Lexington Opera House,” said Matt Haydon, an Earth 2 community member who recently shared his special experience publicly online.

He went on to say, “I’m thankful Earth 2 added the gifting option. A few minutes and 1 tile later I’d frozen a moment in time forever. It’s a simple way to “engage” the recipient and give them a taste of E2. New user or existing, it’s a nice touch just in time for the holiday season.”

Pictured (above & below): Newly engaged couple, Matt Haydon and his fiancé.

Using our new gifting feature to share and immortalise meaningful locations is only one of many varying reasons to give the gift of land to someone.  With our recent introduction of Tier 2 virtual land tiles, a partnership with Polygon Studios and the tech acquisition of DRONE the Game, now is a great time for players to reserve their own piece of the future inside Earth 2.

Pictured (above & below): Image of the land tile purchased by Matt Haydon and the description of the property.

Select the tile/s you wish to purchase and follow the transaction process as normal. Signing up on Earth 2 is free.
Before finalising payment for the selected tiles, select the “This is a Gift” checkbox.
In the space provided, enter either an existing Earth 2 account name or an email address if your giftee is not yet an Earth 2 player.
Continue with the transaction as normal.
Once the transaction is complete, a gift redemption code will be automatically sent to you and your giftee via in-game notifications (existing user) or via email (new user).

The team at Earth 2 loved hearing about the story of Matt’s proposal, if you have a unique story you would like to share with us, post it on our official Earth 2 Community Facebook page, or tag us in our socials!

Earth 2® is a futuristic concept for a second earth; a metaverse, between virtual and physical reality in which real-world geolocations correspond to user generated digital virtual environments. These environments can be owned, bought, sold, and in the near future deeply customized.

Permission was obtained from Matt Haydon to include his story and images in this article.  The Earth 2 team would like to thank Matt Haydon for his permission and to congratulate Matt and his fiance on their beautiful and unique engagement.  We wish them many happy years ahead together!