Five Best Meme Cryptocurrencies To Keep An Eye On In 2022 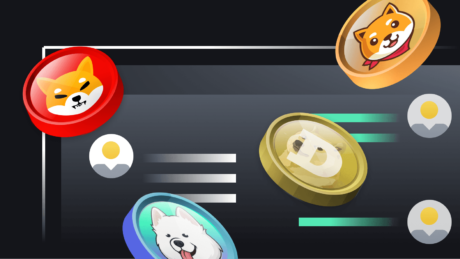 Meme tokens are cryptocurrencies with increased popularity within a short period. The remarkable acceptance of this type of cryptocurrency comes from the activities of retail investors or influencers. As a result, the meme cryptocurrencies have experienced tremendous growth throughout 2021. This explains the new market capitalization of the coins, which is more than 43 billion.

The meme cryptocurrencies are gaining more adoption in different sectors, of which Dogecoin and Shiba Inu are the top tokens with astronomical increases. In addition, some companies like AMC Theatres, Guaranty Escrow, EasyDNS, and others now accept Dogecoin for payment.

Related article | Only In Crypto: A Croissant Breaks Down How GameStop & NFTs Will Boost Ethereum

Here are some of the meme tokens you can include in your digital portfolio.

Dogecoin has taken the lead is the top and most profitable meme coin for your investment. With the influence of Elon Musk, the CEO of Tesla and SpaceX, Dogecoin, witnessed significant growth in 2021. Furthermore, the billionaire CEO, Musk, announced in December 2021 that Tesla adopted Dogecoin as one of the payment options.

Besides Tesla, other companies are interested in this fast-growing dog-themed meme coin. For example, AMC Theatre, one of the prominent theatres with the most significant number of branches, indicated its acceptance of DOGE as a payment method.

DOGE currently is facing a dip | Source: DOGEUSD on Tradingview.com

The move of this number meme token has put its market cap at 22.7 billion while its price at the time of writing is $0.1582 showing a dip of 7% within the last seven days. Dogecoin had its all-time of $0.73 on May 3, 2021. Analysts predict that this meme coin will hit $1 in a few months from its price performance.

Shiba Ina Coin has made a remarkable increase making its way to the top ten cryptocurrencies. SHIB stands as one of the top meme tokens for profitable investment with its price performance.

It has competitively raced with Dogecoin to emerge as ‘the most searched cryptocurrency for 2021’. Coinmarketcap gave a record of more than 188 million views for Shiba Inu as the top as Bitcoin follows behind it with about 145 million views.

Dogelon Mars is derived by joining Dogecoin and Tesla’s billionaire CEO, Elon Musk, promoted Dogecoin. As a result, this meme coin has risen to be number 3 meme tokens and stands as an excellent investment means for profit.

By following the steps of Dogecoin, Dogelon Mars has become one of the top meme coins that are highly sought for. Some crypto exchanges such as Huobi, Gemini, Crypto.com now support the meme coin on their platforms.

Samoyedcoin shares some similarities with the Solana Network. However, the meme coin enables high scalability, speedy transactions, and low fees.

Furthermore, the meme coin ensures scarcity through its token burns three times from its launch time. The last destruction in November 2021 resulted in the burning of up to 500 million SAMO tokens.

Created in December 2013, Monacoin operates as an open-source p2p network.

This meme coin was developed in Japan as the first altcoin. It later boomed after being used in an advert for buying land in Nagano.

Related article | Why was 2021 an important year for NFT?

Monacoin currently has a market cap of about $77 million. Its price at the time of writing is $1.11, with a 1.95% dip within the last 24 hours. The meme coin had its all-time high in 2017 and is considered one of the investment tokens to boost your profit.