CELED by Stephen Vineburg as a symbol of NFT art revolution 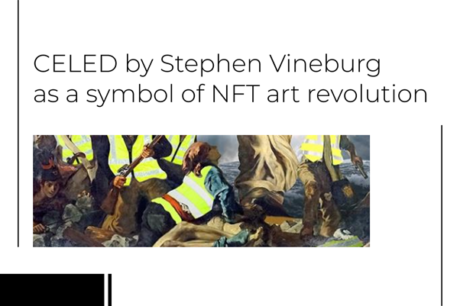 Stephen Vineburg, an artist from the UK, launched his NFT artwork CELED as both a unique NFT and digital phone-based AR filter, that brought 3D life to a still image. CELED is an amalgam of elements of ‘Liberty Leading the People’ by Eugene Delacroix from 1830 and ‘The Wreck of the Medusa’ by Theodore Gericault from 1818. The main idea of the art piece is an observation on extant affairs, where despite all the chaos and distress that is being experienced by society, our leaders are perhaps more focused on their own vanity than providing leadership.

Stephen Vineburg has developed a conceptual art practice with a focus on using AR to explore contemporary issues. In 2021 Stephen was the artistic partner for “Suspension”, a digital art project which addressed the digital paradox of the duality of isolation and connection. It was launched in partnership with the European Cultural Academy as a collateral event to the Venice Biennale. Stephen is an art historian with a multifaceted personality and has interests in art, film, music, and business. In 2018, Stephen was an Executive Producer of the award-winning, independent film, ‘Emu Runner’ which had its world premiere at the Toronto Film Festival. Stephen believes that the NFT market will soon move away from pieces that simply showcase the digital technology, to using the art form to make provocative artistic statements, and that CELED is a first mover in that direction.

CELED is a result of Stephen’s interest in the exploration and re-interpretation of classic artistic images as a way of addressing contemporary issues. Stephen says the project is predominantly about a few things: developing a conceptual art practice with a focus on using AR to explore contemporary issues and experimenting with movement between the physical and digital worlds. A unique feature of the piece is that it uses the full range of the animation provided by the NFT and AR technology to make an engaging art piece, that is also making an artistic statement.

In many cases, the NFT art space is either populated by cartoon characters or is merely showcasing the digital animation technology, but in both cases ultimately bereft of artistic statement or meaning.

CELED is a result of the evolution of Stephen’s art path starting from physical pieces all the way up to NFTs, which represents constant growth and transformation. Explore his artwork on Foundation.