What a week in the New Earth Metaverse: Next Earth will be Listed on a Centralized Exchange 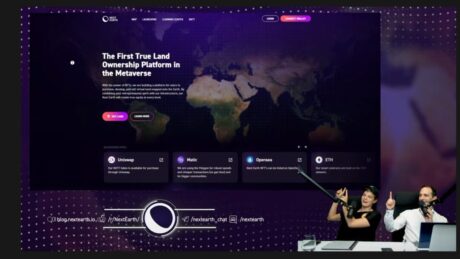 There’s more, and it’s only Thursday! Exciting a week for the third-largest metaverse: Next Earth today announced that the NXTT token will be listed on a centralized exchange, with plans to be in another top 3 exchange within 2-8 weeks of this first listing. Gabor Retfalvi and David Taylor explained in their Youtube live session, that CEXistings will provide more liquidity and accessibility to the NXTT token, and will help to further grow the booming Next Earth community.

With the first CEX listing agreement complete, all that remains is technical steps for the CEX listing to happen around the middle of April.

Also, Next Earth is pleased to be a sponsor of the upcoming CCTF hacking competition. This great event focuses on educating and growing the hacking community.

The company also announced its investment in Primal Game Studio, a game development studio with experience in developing exciting adventure and RPG games. Both enterprises focus on community-driven experiences, enabling the potential for shared knowledge and viewpoints from different perspectives, which will make this a strong partnership.

Next Earth aims to build an immersive, interactive metaverse, and Primal is at the forefront of video game production: this investment is an opportunity to build virtual reality worlds together. Primal’s current and future video game titles will not be affected by the partnership and are not going to include NFTs or other forms of blockchain technology, but Primal will fully leverage its decades-long expertise in cutting-edge technologies and content production to support Next Earth in its journey to building the world’s premiere metaverse experience.

Primal Game Studio will remain fully independent, pursuing its own vision and business strategy while its partnership with Next Earth will enable the worldbuilding of their immersive Metaverse. This strategic investment aims to equip Primal Game Studio with the assets to grow their business and fulfill the growing demand they’re facing – while also enabling Next Earth to start building its Web3 Metaverse environment with one of the best quality game development companies in the video game industry.

Primal Game Studio is an independent game studio founded in Budapest that adds new twists to classic genres in its mid-core and hardcore titles. Since its foundation in 2012, the studio’s team of industry veterans and passionate game makers have worked on various exciting titles for partner studios, including products in the League of Legends universe for Riot Games, Warhammer: Mark of Chaos, and Might and Magic: Heroes 6. Primal’s currently announced upcoming games, both Epic MegaGrants recipients, are Around, a hand-drawn adventure game, and Mandragora, an epic and dark fantasy action RPG.

Taylor and Retfalvi also spoke about their first launchpad project: The Next Earth launchpad is kicking off with a real estate agency project. This will be a great way for the company to get started in the industry and to provide a valuable service to their community.