How is SAI.TECH, a recently listed Bitcoin mining operator, driving towards carbon neutrality? 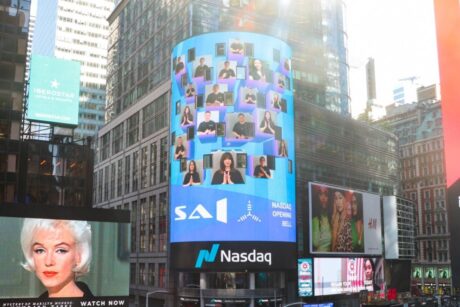 The past year has experienced a boom in SPAC crypto mergers, with companies like Core Scientific Inc. Bakkt and Cipher Mining being a few notable examples. SAI.TECH (“SAI” or “the Company”) got on the wave of SPAC listings right before SPAC mergers got more difficult. Having gotten officially listed on Nasdaq on May 2nd, SAI is the first “chip heating” concept stock on the exchange, with its CEO & founder Arthur Lee also becoming the youngest Chinese CEO ever listed.

Bitcoin has become one of the most attractive emerging assets on the market in recent years, but the need for increasingly energy-intensive computing infrastructure has caused concerns about its sustainability. By promoting ESG standard technologies and solutions, SAI, as a global energy-saving bitcoin mining operator and a clean-tech company, is trying to prove to the market that the feasibility and the company’s business model might leads bitcoin mining to a more sustainable future. We sat down with Arthur to talk about the company’s innovative technology.

Q1: First, I would like to congratulate SAI on getting listed on Nasdaq. Can you give our readers a brief introduction of SAI? What’s the inspiration for your innovation?

My inspiration is based on what I see as the two major trends of the early 21st century – sustainable development and decentralized digital network. Over the past 20 years, sustainable development has become a shared goal globally. Another trend is, decentralized digital cryptocurrency like Bitcoin has experienced a boom, ushering in the future of web 3.0. The high value of Bitcoin has proved its significance but has in equal parts been criticized for its high energy consumption and un-sustainability. As a result, how to better solve the energy consumption problem while ensuring the stable operation of the Bitcoin network has become an unavoidable dilemma facing us.

As a Bitcoin mining operator, SAI foresaw this problem as early as 2019 and has been actively looking for partnerships with large mining pools. With the support from one of our close partners ViaBTC, a world-leading crypto mining pool, we introduced SAIHUB, a cost-efficient solution created to reduce the high costs involved in the mining process. After three years of development, SAIHUB has leapt from 1.0 to 3.0. The latest SAIHUB 3.0 is an integrated and decentralized solution designed to horizontally integrate the computing, power and heating industries to build a more efficient and sustainable infrastructure for Bitcoin mining.

Q2: How can the Bitcoin mining infrastructure become more sustainable? How does SAIHUB solution factor in that?

According to calculations, about 99% of the electricity consumed by Bitcoin mining machines turns into heat energy. This part of the heat energy has been neglected for a long time, so it is referred to as “waste heat.” Instead of using an extra huge amount of electricity to cool data centers, our SAIHUB solution is capturing that waste heat and using it to defray energy use elsewhere.

With the help of SAI’s patented waste heat utilization technology, 90% of the heat generated by the mining process can be recovered and reused into heating sources for various residential, commercial, industrial, and agricultural application scenarios.

In recent years, the use of renewable energy for Bitcoin mining has dropped significantly as various factors have led natural gas and coal to become more popular sources of power for the industry. This change has made SAI’s mission even more vital.

Q3: Can you introduce more of the SAIHUB solution? What’s the history behind this solution?

The evolution of SAIHUB has gone through three stages. At the 1.0 stage (2019-2020), SAIHUB used 16nm chips. The power was 50kw, with hash rates around 350T. This solution was able to reuse waste heat for single-house heating services. The SAIHUB 2.0, 2020 – 2021, was a step forward, adopting 7- 8nm chips, with the power for a single SAIHUB being around 250kw and hash rates leaping to 5P. This version was enough to recycle the heat for a small community or an agricultural greenhouse, thus enabling us to provide large-scale heating services.

At this stage, we are willing to open up our patented liquid cooling and waste heat recovery technology to scale up the SAIHUB business model, enhance the efficiency of the whole industry together with our partners, including ViaBTC Pool, and promote the clean transition of the computing industry.

Q4: You just mentioned the partnership with ViaBTC Pool. Could you please introduce this partner in more detail?

ViaBTC is our strategic partner and also one of the major supporters of SAIHUB. As an all-encompassing crypto mining pool established in 2016, ViaBTC is well-recognized for BTC mining and has extensive influence in that field.

As global warming escalates, the international call for carbon neutrality is also growing stronger. The mining of PoW-based cryptos like Bitcoin consumes a massive amount of fossil energy. ViaBTC shares our belief that we should boost the innovation of clean energy technologies to improve the utilization of clean energy in crypto mining and reduce its environmental impact.

At the same time, we have also engaged in profound exchanges and cooperation with ViaBTC regarding the SaaS solution. In the future, we also hope to partner up with more companies in the field of BTC mining that share our beliefs. Together, we will expand the blockchain space and accelerate the progress of Bitcoin.

Q5: SAI recently took a major step into the tech market by getting listed on Nasdaq; what gives SAI an advantage in the competitive market of Bitcoin mining innovation?

Bitcoin has always been associated with high energy costs and unsustainable infrastructure, and the massive amounts of heat produced have been a constant cause for concern. Few people, however, have thought of using this resource as an asset, and this insight is what makes SAI stand out. Not only that, but our company also consists of an elite team with rich experience in the field.

Although the cost of electric heating is currently higher than that of fossil energy heating, as carbon taxes and various policies increase the price of fossil fuels, this will eventually change. It is estimated that the cost of using natural gas to obtain heat will be about 65% higher than that of electric heating by 2050, meaning that heating will inevitably be primarily electric. In this case, SAIHUB has an inherent advantage over fossil fuel-based heating solutions in the long term.

Let’s review the carbon neutrality roadmap committed by the world’s major countries. Most developed countries, including the United States, Japan, and the United Kingdom, have set the deadline to be 2050. However, the recent Russian-Ukrainian tensions have brought the European energy market to a standstill. In addition to the price increase of more than 200% for natural gas, countries like the United Kingdom must reconsider using coal to replace natural gas power generation. The contribution value of clean energy to achieve carbon neutrality may also require a considerable reduction in consumption levels according to current forecasts, which means that in the next twenty-eight years, energy efficiency plans such as those represented by SAIHUB will take on more responsibilities, which is a challenge, but also a rare historical opportunity.