Ukraine Is Getting Aid From This DeFi Project 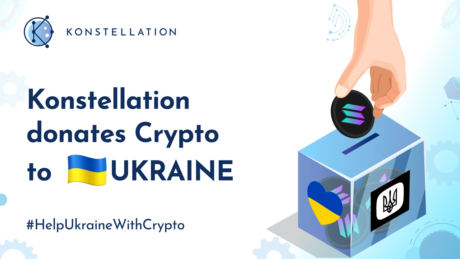 Blockchain networks are decentralized, meaning that they can be used to make payments without centralized authorities deciding which transactions are allowed. While some argue that such systems can enable fraudulent transactions, blockchain networks use advanced mathematical technologies called consensus mechanisms to prevent this. Thus, blockchains can be used by peers to transact without fear of fraud or censorship. In turn, cryptocurrency enables individuals to easily support the causes that they believe in, even when reaching affected groups through traditional means may be difficult.

Because cryptocurrencies are universal, that is they are not tied to individual countries, they make accepting donations from anyone in the world possible during times when global political circumstances make doing so through traditional money transfer methods incredibly difficult. As an example drawn from current events, cryptocurrency is enabling Russian citizens who condemn Vladimir Putin’s invasion of Ukraine to send aid to Ukraine’s government and its people.

Since the first day of combat, the broader cryptocurrency community has stringently supported Ukraine’s independence. Within a month of Russia’s invasion, over USD 63 Billion in various cryptocurrencies had been donated to Ukraine’s official wallet addresses. Since then, donations have only increased; according to tradingplatforms.com, last month’s donations alone topped USD $100 Million. The overwhelming donations being sent by the cryptocurrency community are being used by Ukraine to bolster its defenses and rebuild.

Following their users, countless cryptocurrency projects have jumped on-board in support of Ukraine. Projects of all genres and sizes are participating. For example, projects within the Konstellation ecosystem dedicated efforts to raising charitable donations to Ukraine, one of which is Squid Squad OG, the world’s first Rock, Paper, Scissors blockchain-based play-to-earn game. Once the fundraiser concluded, Konstellation Network, a blockchain protocol, matched the donation. Through fundraisers held by its various products, the Konstellation Network donated a total of over $14,000 USD to Ukraine.

Though the fundraising round has ended, SSOG NFTs can still be bought. In addition to representing the good that cryptocurrency can do, they act as whitelist passes for the second mint of Squid Squad OG’s popular play-to-earn game, SSOG – a unique title inspired by the hit Netflix special Squid Games.

In SSOG, contestants compete for a massive prize pool through high stakes, high rewards games of Rock Paper Scissors. Losers are eliminated, and winners get closer and closer to hitting the jackpot. The final victor wins it all, but only if contestants don’t vote to stop the games early and split the prize pool between themselves.

Konstellation is a decentralized cross-chain capital markets protocol built on the Cosmos network. The project is aimed to efficiently connect funds and the various components of the asset management industries with investors. Konstellation’s mission is to become the financial services industry hub for Cosmos and other blockchain ecosystems using strategic inter-operable blockchain communications.