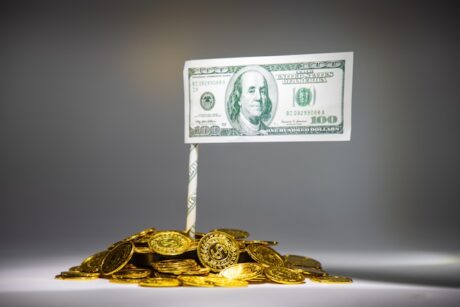 Bitcoin has displayed some strength during today’s trading session after re-visiting the bottom of an important trendline. The benchmark crypto has been trading in a tight range, between $18,600 and $19,500, but the monthly close might support a spike in volatility as bulls and bears fight for this candle.

At the time of writing, Bitcoin (BTC) trades at $19,400 with a 2% profit in the last 24 hours and 7 days. Other cryptocurrencies seem to be the following Bitcoin as they record small profits on low timeframes. The benchmark crypto might be preparing for further gains.

In addition to the monthly close, Bitcoin’s recent price action seems to be supported by a crash in the U.S. Dollar. The currency was able to reach levels last seen in the early 2000s, as it touched 115 on the DXY Index, but it was rejected from these levels.

At the time of writing, the DXY Index trades at 112 and might return to its early September lows much southern. The DXY Index’s rally has been one of the main obstacles capping the upside in Bitcoin and other risk-on assets, such as equities.

In that sense, a revisit of the September lows might allow the crypto market to extend its current bullish price action over the coming weeks. According to analyst Justin Bennett, the DXY Index price action might support a Bitcoin rally back to $26,000.

The cryptocurrency might reach this level before the next U.S. Federal Reserve Federal Open Market Committee (FOMC) meeting. As seen in the chart below, Bennett claims that Bitcoin has been trading in a channel with a bottom at around $18,700 and a top at $27,000.

With U.S. dollars trading to the downside, Bitcoin might be able to reclaim the high of this channel. The analyst wrote: “As long as $18,700 holds, this is my Bitcoin playbook through October”.

BTC moving away from the bottom of this channel, how far will it rally? Source: Justin Bennett via Twitter
Bitcoin On A Lighter “Bear Market”?

Additional data from a pseudonym analyst indicates that Bitcoin might be in a lighter downside price action. The analyst looked into BTC’s price previous drawdown from its all-time highs (ATH) and discovered that the cryptocurrency is only 74% from those levels.

In the 2013 and 2017 bear markets, Bitcoin crashed 84% from its previous all-time high and in 2011, 93%. This could suggest BTC bear market is getting weaker or that the cryptocurrency might see another leg down.

In addition, the analyst discovered that Bitcoin has spent 316 days away from its all-time high. In previous years, the cryptocurrency is able to find a bottom on an average of 312 days after crashing from its ATH. In that sense, the analyst concluded:

The duration of 316 days in current bearmarket so far is between 2011 and 2013 + 2017. Either, we bottom soon-ish or this time is different. The average duration from top-to-bottom is very interesting as well. The average is 312 days, which is where #Bitcoin is right now.