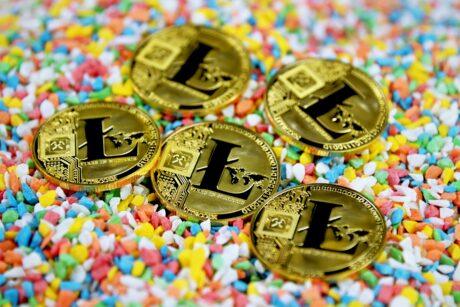 On-chain data shows the combined Litecoin address count of sharks and whales is now at a 2-year high, a signal that could be bullish for the asset’s value.

As per data from the on-chain analytics firm Santiment, LTC has been climbing strongly since the population of these large addresses began to rise. The relevant indicator here is the “Litecoin Supply Distribution,” which tells us how many addresses (or holders) belong to each wallet group in the market currently.

Addresses are put into these wallet groups based on the total number of coins that they are currently holding. For example, the 1-10 coins band includes all addresses that are holding between 1 and 10 LTC right now. The Supply Distribution metric for this band would then measure the total amount of such addresses that are there in the market currently.

Now, the wallet groups of interest in the current discussion are those with at least 1,000 LTC. Since there is no upper bound here, all balances ranging from this amount to infinity are stacked together. Here is the Supply Distribution chart for these Litecoin address bands:

As the above graph displays, the value of the indicator for Litecoin addresses falling inside this range has been rising since May of this year. Holders that have 1,000 or more coins in their wallets are sharks and whales, so this uptrend implies that the total number of these large investors has been going up in the last few months.

Just recently, the address count of these holders hit a value of 4,232, which is the highest value recorded in more than two years. From the chart, it’s also visible that while these sharks and whales have been increasing in number (and hence accumulation has been going on), the LTCBTC ratio has seen a rise of more than 130%.

Since this accumulation hasn’t seemed to have slowed down recently, it’s possible that it could sustain further appreciation in the price of Litecoin heading into 2023. LTC’s next halving, an event where its supply production would be cut in half, is also scheduled to take place in the August of next year and has historically had a bullish effect on the price as well.

At the time of writing, Litecoin’s price floats around $67, up 4% in the last week.