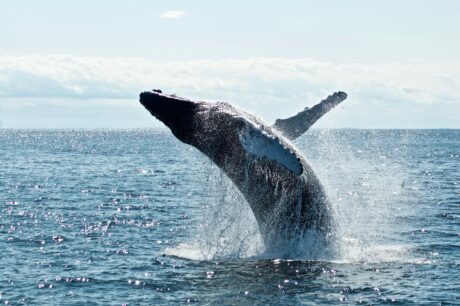 On-chain data shows Bitcoin whales have accumulated $1.4 billion in the asset during the last two weeks, a sign that could be bullish for the coin.

Bitcoin Whales Added 70,000 BTC To Their Holdings In Two Weeks

As pointed out by an analyst on Twitter, BTC whales have been showing accumulation behavior recently. The relevant indicator here is the “Bitcoin Supply Distribution,” which is a metric from on-chain analytics firm Santiment that tells us which wallet groups in the market are holding what amount of the crypto right now.

Wallets are divided into these groups based on the total number of coins they are holding currently. For example, the 10-100 coins cohort includes all wallets that are carrying a balance of at least 10 and at most 100 BTC. The Supply Distribution metric for this specific group would then show the combined number of coins that are present in these wallets at the moment.

In the context of the topic at hand, the wallet group of interest is the 1,000-10,000 coins group. Here is a chart that shows the trend in the Supply Distribution for this Bitcoin cohort over the past month:

The 1,000-10,000 coins wallet group is an important cohort for BTC as it includes addresses belonging to the whales. Since the balances of these investors are huge (the lower and upper bounds of the range convert to $22.9 million and $229 million, respectively, at the current exchange rate), movements from this cohort may sometimes have visible effects on the price of the crypto.

As can be seen in the above graph, the amount of Bitcoin being held by the whales was going down during December, suggesting that these humongous holders were selling their coins then. At the start of this year, however, the metric bottomed out and since then this cohort has shown net accumulation behavior.

Interestingly, while this buying from the whales has taken place, the price of the crypto has observed a sharp rally. Around five days ago, this BTC rally saw its first significant pullback and from the chart, it’s visible that these investors participated in some selling around it.

In the last few days, however, the 1,000-10,000 BTC wallet group has again done some buying as their Supply Distribution curve has once more spiked up. Following this latest accumulation, BTC has again caught a sharp uptrend as the price of the coin has now surged to almost $23,000.

In all, these whales have added more than $1.4 billion worth of coins to their holdings in the last couple of weeks, taking their total holdings to 4.62 million BTC ($105.8 billion).